This MasterPieces John Wayne 13" x 39" 1,000 Piece Panoramic Puzzle Features A Montage Of John Wayne In The Various Films He Starred In Throughout His Career. Marion Morrison's first important starring role, and the name of John Wayne, was given to him by director Raoul Walsh in 1929. The picture was The Big Trail (1930), where the 22-year-old Wayne was chosen to star as trail scout Break Coleman. America's favorite cowboy filmed his last movie "The Shootist" in 1976. He starred in 171 movies over a span of 50 years. This puzzle is called "Forever in Film" because it features a film strip of several John Wayne images - John Wayne riding a horse, walking a dog, holding a rifle, and even wearing a suit. To reduce its impact on our environment, the chipboard used in this puzzle is made of recycled material. 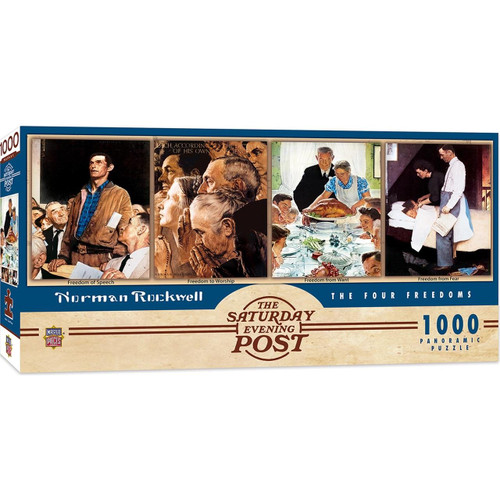